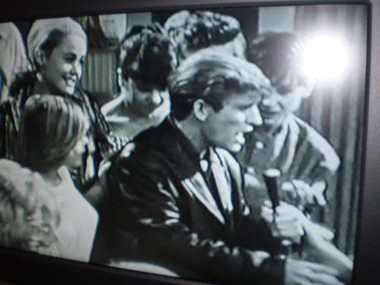 Not a new DVD but in great condition in a plain cover.We are the only seller of this rare DVD on the Internet.

To see John Leyton singing one of the songs on this DVD "Lonely Johnny" please scroll down below the text and click onto the section Product Video's.

Quality is a little shaky at times but in general very good.

To see anything on John Leyton is very difficult so here we have a fantastic DVD of Leyton singing  original 1960's performances plus a great 30 minute documentary The John Leyton Story.The total DVD lasts for 63 minutes.

John caused a sensation in the early 1960's in Britain with his legendry songs produced by the equally legendary record producer Joe Meek who can be seen on some of the John Leyton Video's working in his recording studio in Londons Holllaway Road.a

Backing John on "Son this is She" and"Wild Wind" can be seen the Legendry instrumental group The Tornado's [Telstar Fame ] and the Female backing singers and orchestra all who were used by Joe Meek in his Holloway Road Studio in London.Also see Conductor and arranger Charles Blackwell

10..Every days a Holiday [with Mike Sarne]