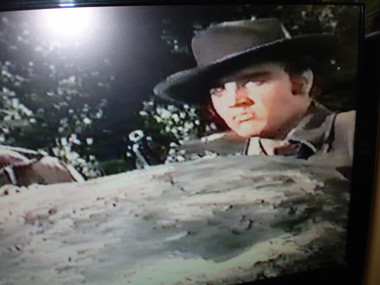 *****We do not want to mislead customers.This DVD is not of the highest reproduction quality.The colour is fine but sometimes the film can be somewhat shakey.Also although the film is in English it has Japanese subtitles which can be a little annoying until you get used to them.Nevertheless the DVD is totally watchable and fantastic to see Love Me Tender in colour.

*****No quibble return if unhappy

Love Me Tender was a huge hit film in 1956 almost totally because of the first appearance of its co-star Elvis Presley.

The story [unusually for that time] features around  The American Civil War which many westerns at that time almost pretended had never happened.

3 Reno Brothers the eldest Vance are part of a Confederate force called Randalls Raiders.They attack a Union payroll and capture a large amount of money.Unknown to them the war has suddenly ended so they decide to keep the money.Vance and his brothers head home to their farm and to marry his sweetheart Cathy.Everyone thinks Vance and his two brothers were killed in the Civil War [ including Cathy]

Cathy in the meantime has married another Reno Brother Clint [played by Elvis] who at the commencement of the war was too young to go.

Presley appears as a young experienced actor at the start of the film but once he thinks that Cathy is having an affair with Vance his acting becomes explosive [almost James Dean ] and steals the film.

A Great,Great Film with a different sophisicated story line and if you can put up with the Japanese subtitles a real bonus in Colour [and Yes it is in English,not Japanese.