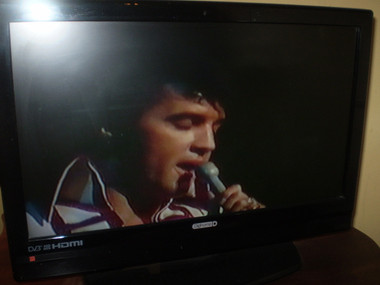 Not a new DVD but in great condition in a plain cover.To see one of the great songs on this DVD please just scroll down this page until you reach product video's and just click onto that.

25 performances here and these songs were not included in the concert movies " Elvis,Thats the way it is" & "Elvis on Tour"

Elvis is on top form in the 1970 stage section.He seemed to love singing contempary ballads and did not seem to have much interest in performing his Rock n Roll hits.Looking slim and fit watching Elvis perform on those ballads is pure joy.He sings them with such feeling.

Elvis jamming in the studio with his band in 1970 performing great blues numbers such as " Baby lets play house" & " Money honey".Elvis is on Guitar here.These performances could have been legendary but Elvis appears to be on something and sadly just does not realize what amazing performances he is giving and just mucks them up. A Crime.

The 1972 performances shows Elvis not on as top form as he was just two years previously but still driving his audience wild.