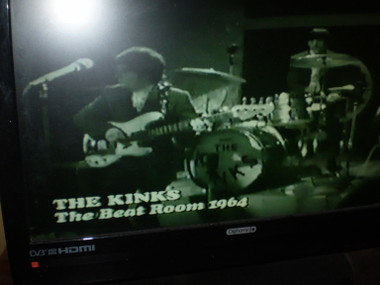 Not a new DVD but in great condition in a plain cover.To see one of the great songs on this DVD please just scroll down this page until you reach product video's and then just click onto that.

This great DVD only lasts for 30 minutes but it has some amazing rare performances from that era.Do see The Kinks in a stunning live performance of the first viewing ever of "You Really got Me".The Moody Blues back in 1965 performing "Go Now" that great Bessie Banks original.The Moody Blues version shot to number 1 in Britain.This was when Dennie Laine was their lead singer.He was to eventually join Paul McCartney in the group Wings.The Rolling Stones are superb as always and some great early Tom Jones from 1964.John Lee Hooker was one of the original Blues men ignored at that time by the American Public but the British loved him here seen in 1964.Another superb British Blues band were The Pretty Things seen here performing "Midnight to Six Man".Chart success missed them but in the London Clubs they were Second to none.In between is some amazing Vintage British Film from 1960's British Television.The British adults were so polite and well spoken but their young wanted to be a little wilder.Was it progress [ decide for yourself ]